In simple layman’s term Cryptography is an art of secret writing. It is necessary when communication in over untrusted network

Major functions of cryptography can be classified in following

In cryptography “plaintext” is called as unencrypted data. This plaintext is then encrypted into cipher text, which in turn can be decrypted back into plaintext. The encryption and decryption is done depending on the type of cryptography scheme and some form of key.

The usual formula for implementing cryptography is 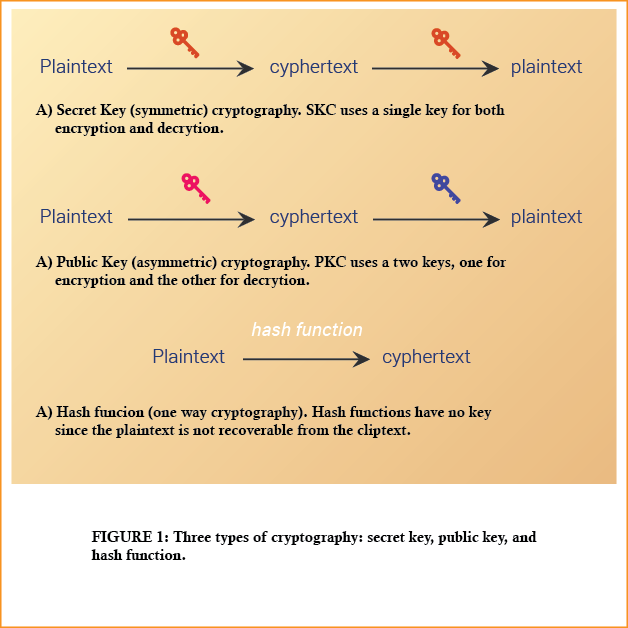 Secure use of cryptography requires trust. Even though secret key cryptography can ensure message confidentiality and hash codes can ensure integrity, cannot perform without trust. Hence there are number of trust models used for various cryptographic schemes. This section will explore three of them:

The above trust models differ in complexity, general applicability, scope, and scalability. However it’s hard to define which one is better than the others; everything it depends upon your application.

The PGP’s web of trust is very easy to maintain and is based on the reality of users as people. The model has its own limitation; imagine just how many public keys can a single user reliably store and maintain? There can be chances that you are using the “wrong” computer when you want to send a message and can’t access your key? How easily can a key is revoked if it is compromised?

Kerberos on the other hand has overcomes many of the problems of PGP’s web of trust, for e.g.  It is scalable and has a very large scope. However, here only there is a limitation that it also requires that the Kerberos server have a priori knowledge of all client systems prior to any transactions, thus making it unfeasible for client/server in e-commerce world.

Certificates and the collection of CAs will form a PKI. In the early days of the Internet, every host had to maintain a list of every other host; the Domain Name System (DNS) for this purpose introduced the distributed database and DNS is one of the key reasons that the Internet has grown as it has.

Interested to learn more? Watch out this space for our next blog on cryptography testing and how it forms an essential component of BlockChain.

Drop in your comments or queries, at https://www.magicblockchainqa.com/call-us/

How Cryptography is Essential Feature in BlockChain

In blockchain technology, cryptography is primarily used for two purposes: To secure the identity of the sender for any transactions. To ensure the past/historical records cannot be tampered with. Blockchain technology widely uses cryptography as a means of protecting the identities of users, ensuring transactions are done safely and securing all information and storages of value. This […]